No village is ever built with the intent of abandonment. Unfortunately, a few villages in Syunik were left to succumb to nature during the Soviet-era and picturesque Maghanjugh was one of them. This is a recap of our time visiting Aygedzor (Maghanjugh’s current name).

For clarification in what we write- Maghanjugh is the ancient name of the village (also spelled Maghanjuk or Maghanjur). The current name and name in modern times was Aygedzor.

The historic village of Maghanjugh has many surviving monuments from ancient times that current make this one of the great places to explore in Armenia for those that love abandoned places.

Records began to appear in the 17th century about Maghanjugh.  It was initially listed as a province and later on was then described to be a village in the Elisabethpol Governorate’s Zangezur province.

Ghevont Alishan writes, “A stream at the edge of Dzagedzor completes the territory of Barkushat. Near that stream is the village of Maghanjuk. In the village, between the south of Karahunj and the north of Tavutlu is the church of Saint Hripsime.”

According to the latest records of the Eparchy of Tatev, Maghanjuk once occupied a big territory. The records refer to the village as “the land of Maghanjughu”, which included the village of Tandzaver.

The location of Maghanjugh offered a lot of conveniences and it was located 800 meters above sea level engulfed in lush, green forests.  It is a rather humid place and the village’s gardens spread far beyond its territory to the land near the Vararak and Vorotan Rivers. 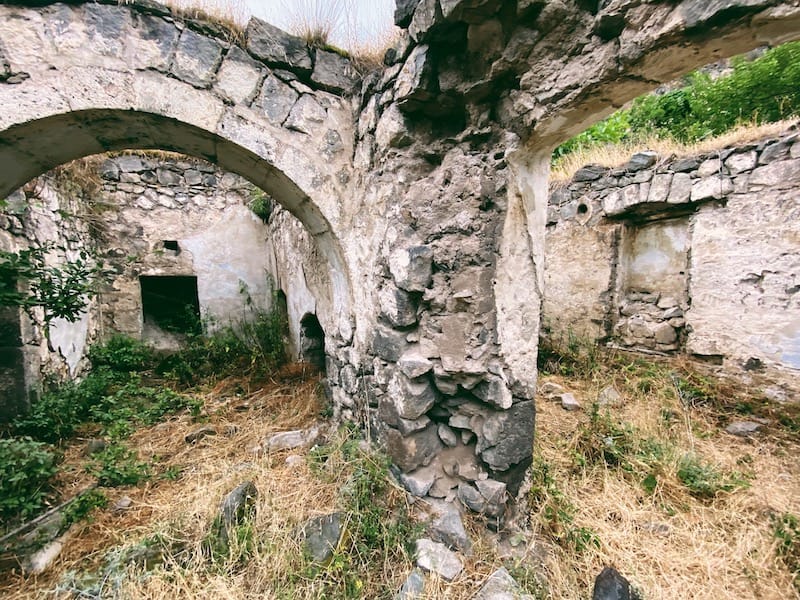 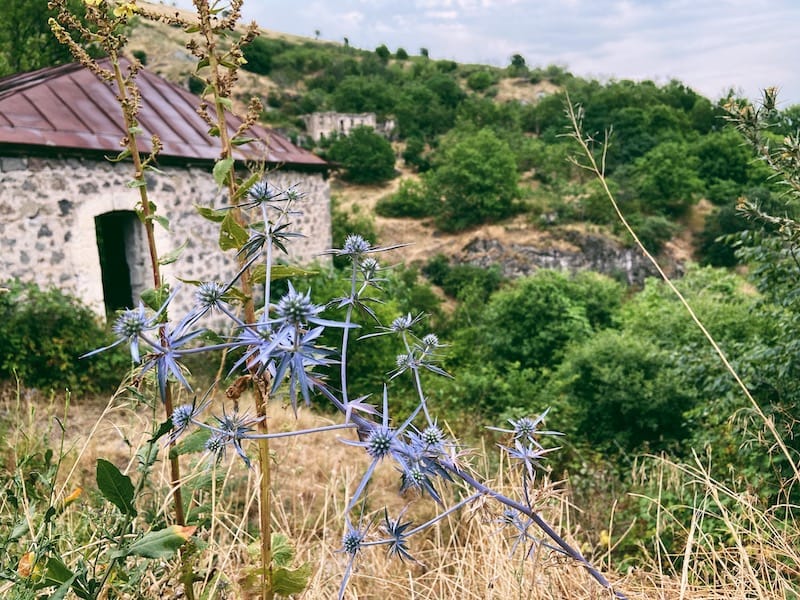 It is thought to believe that the inhabitants of the village and a few other ones (Kyori, Alighuli, and Karashen) originally came from Iran.

The village was in existence until the 1960s. According to a former resident that we met, the village was abandoned as an act of the Soviets who deemed it to be in an uninhabitable place (…or that people could easily plot something there).

Today, the village has been left to nature.  The residents moved to another village and sometimes they still return to harvest fruits from the trees of their ancestors which remain on the land. 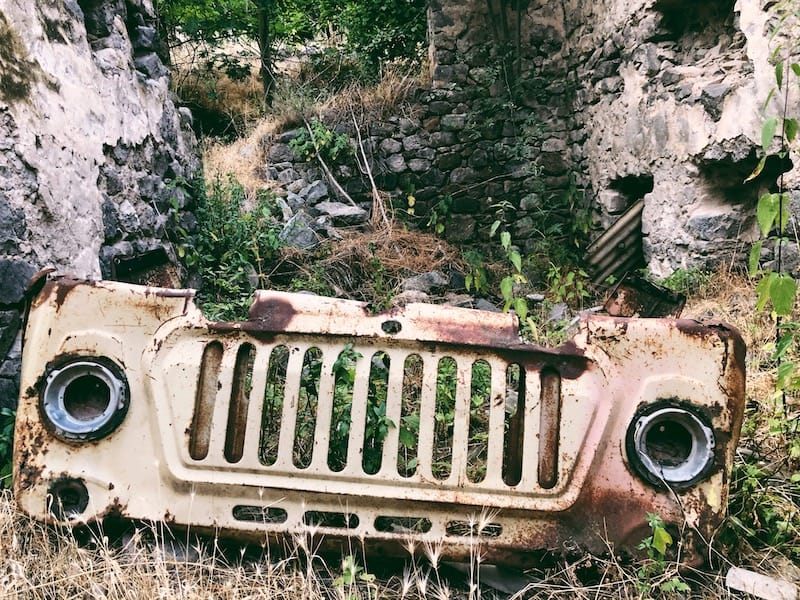 Historian Khanzadyan mentions that the place name originated from the word “Mughani jyugh” (“Mughan” was a historical district on the territory of Armenia, while “jyugh” translates as “branch”). 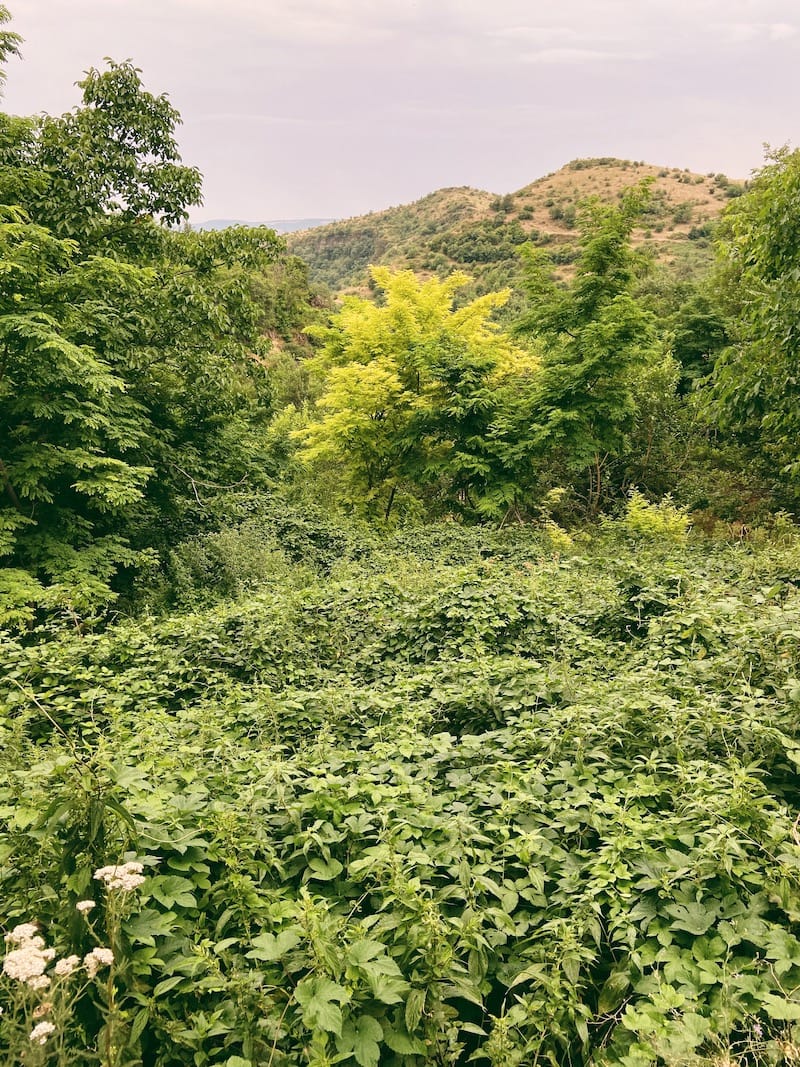 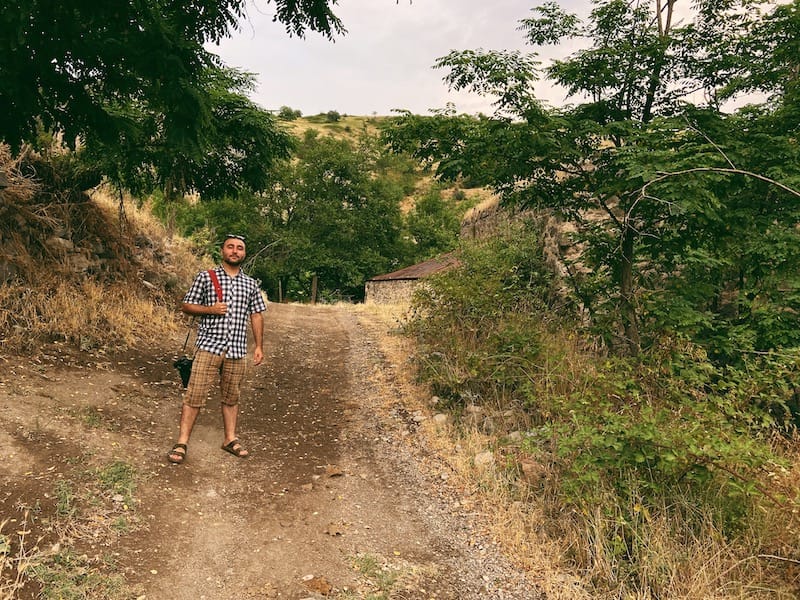 But the interesting etymology of the village’s name does not end there. The Arab word mağara (cave) was borrowed by Armenians, Persians, and Turks. It could be that the place name Maghanjugh derived from the word magharachut (a territory rich with caves).

To the stem maghara- (cave) the suffix –chut (a place rich with something) was added. With time, the suffix -ra on the word maghara dropped. While the suffix –chut transformed into –jugh under the influence of foreign dialects.

The letter “n” was added due to the fact that in the dialect of Goris the sound “n” was usually added before the sounds “j” or “ch.” 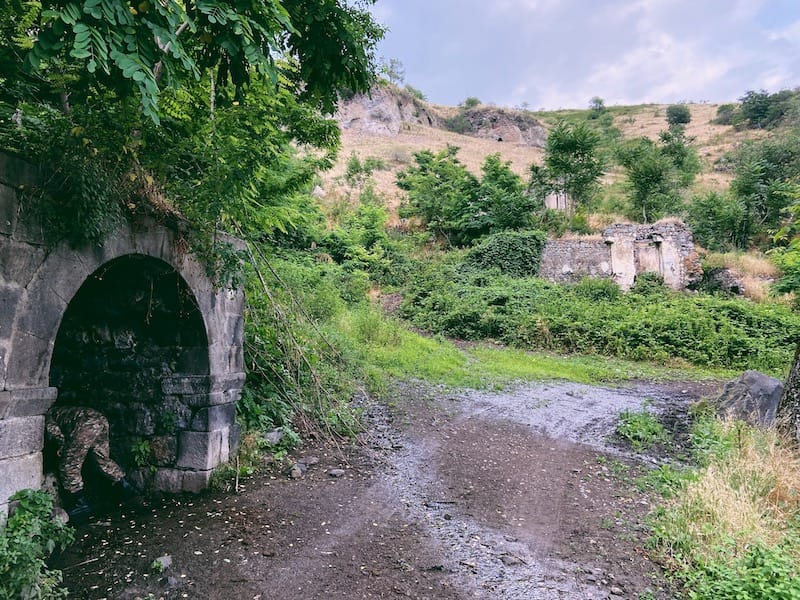 But there is also a version that the suffix –jugh was added simply because it was common to the place names of Syunik such as Kaputjugh and Kalajugh (an old village in Sisian․  However, it is possible that it derives from the Arabic-Persian word جوقه /cuğe/>جوخه /cukhe/, which means “group” or “union”.

The word is largely used in place names. There is also a Persian word وقا /cuğ/jughe, which means “cavernous” or “concave”, which could also help understand the etymology of the name Maghanjugh, which thanks to the etymological examples demonstrated above can be roughly translated as “a group of caves”, or more poetically as a “land of caves”.

We ended up visiting Aygedzor with former resident, Hovik. The village was abandoned when he was two years old and he remains connected with his roots and the village.  In fact, Hovik and some friends have opened up Shahnazar Adventure Campsite nearby.

He drove us on the overgrown road to beautiful Aygedzor. When we arrived, we wandered around, lost in our own thoughts and the memories of a once-flourishing village in the Syunik mountains.

We quickly realized that many of the buildings were without roofs and some of the building materials and he explained that the families often transported materials when they were mandated to relocate. It made the village appear a lot older than it probably was and it gave way to trees and the surroundings swallowing it up.

One of the most interesting things we discovered in Aygedzor was the cemetery surrounding the abandoned church. The gravestones were certainly more legible than we imagined that they’d be and after walking around and reading more about the people that never had the chance to relocate from the village, we noticed something extremely… interesting. 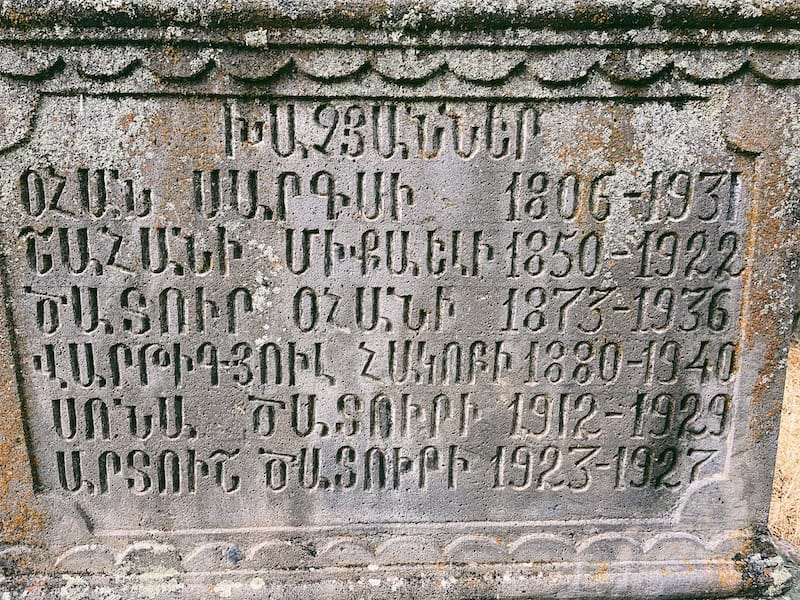 A certain resident of the village lived from 1806-1931. Clearly magic exists in the water in Aygedzor. Or… someone had some fun with the tombstone. Hovik called around to check up on this fascinating find and everyone insisted it was, in fact, true.

I imagine the oldest recorded person to have ever lived (122 years old) would be gutted to discover that someone in Aygedzor made it to 124 or 125. 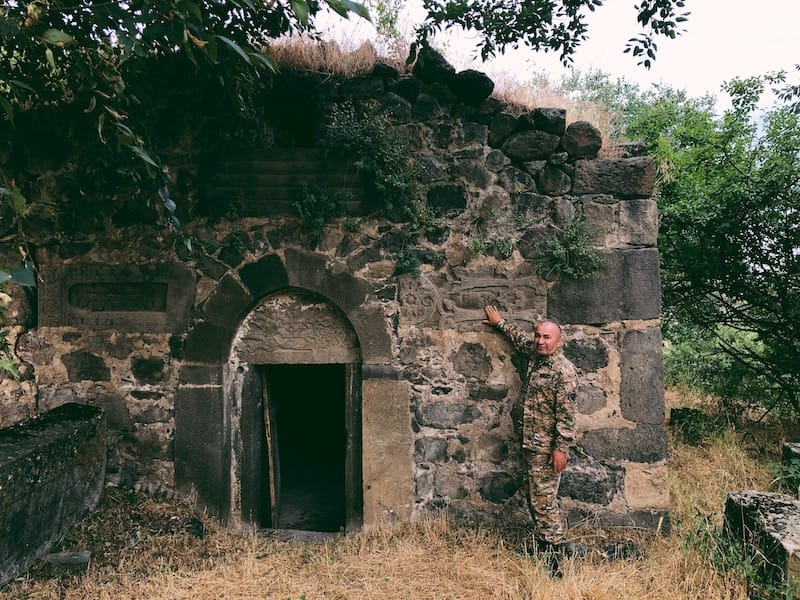 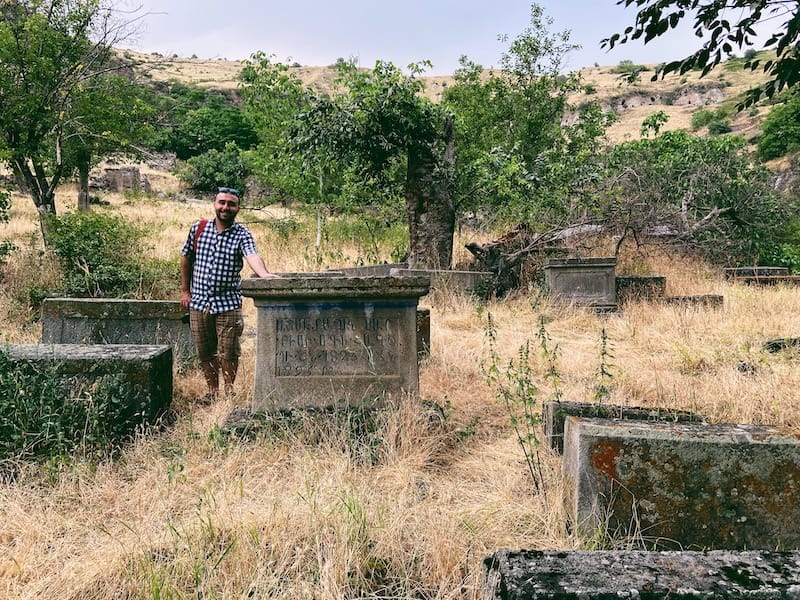 But, I digress… Nevertheless, it gave us a good laugh and immense curiosity about how this error (or truth) ended up on the gravestone in the now-abandoned village.

We wandered about and marveled at how a place without a single person living in it still imposed its story and history on us.  We may never exactly know what people went through when having to relocate from Aygedzor, but something was certainly palpable as we strolled through the weed-ridden land.

Nowadays, the new generations return to explore the land of their ancestors and the fruits that still grow in abundance on the lands. And, Aygedzor is now a stop on the newly created Legends Trail in Syunik. 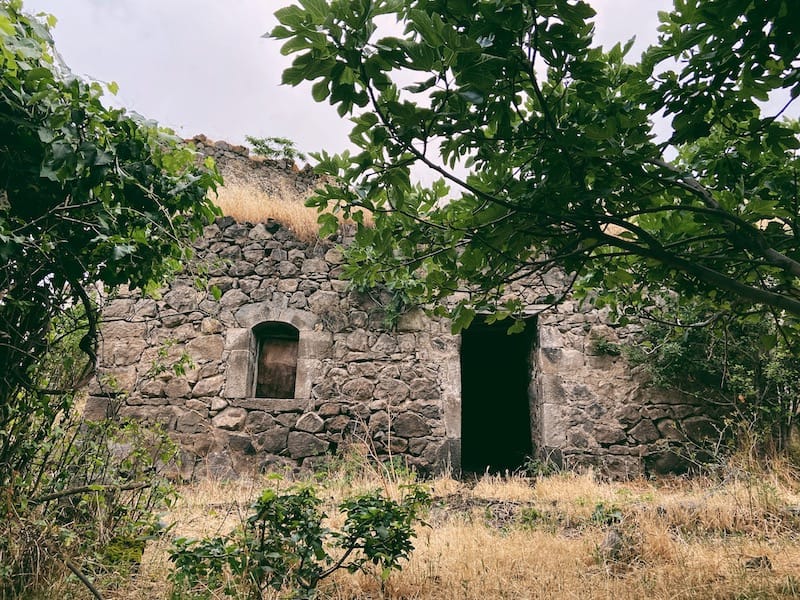 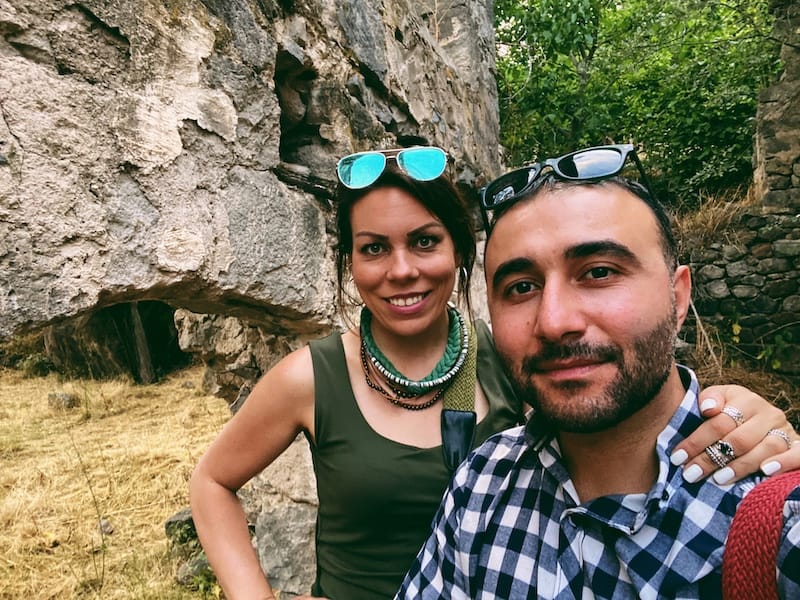 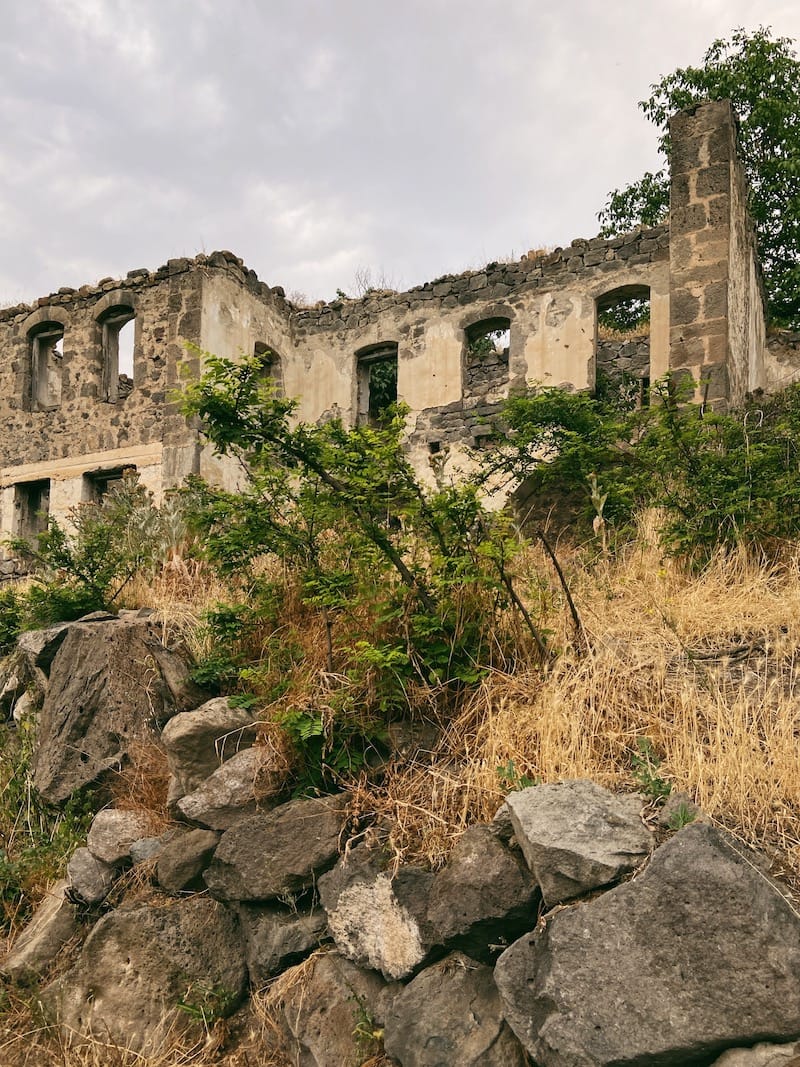 There are a few abandoned villages in Syunik like Aygedzor and you can explore them all by taking to the trail and discovering this remote part of southern Armenia.   If you’re not much for trekking, you can actually schedule a private tour with prior resident, Hovik. 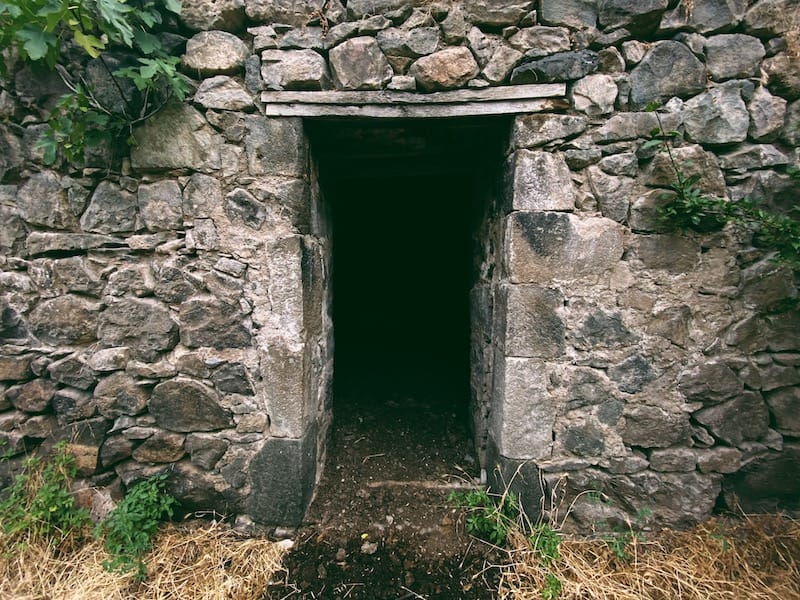 *Our visit to Aygedzor was in collaboration with the EU Delegation to Armenia and People in Need Armenia. Thanks so much to Hovik for your knowledge and for showing us around your ‘home’town! All opinions are our own.