During your travels in Armenia you will wonder at all of the amazing historic sites and probably think “wow, this church is over 1000 years old!”  Well, how would you like to visit a site that is 7000 years old?

That’s right!  The Areni-1 cave is exactly what you are looking for and it is so easy to get to.

If you are traveling to Noravank Monastery, Areni Winery, or anywhere in Southern Armenia, the Areni-1 cave is a must-see stop along the way!

About the Areni-1 Cave in Armenia

The findings in the Areni-1 cave are estimated to be from 5000-4000BCE, during the Copper or Chalcolithic age.  The excavations were first started in 2007 by an Armenian-Irish excavation team and the first thing they found were burial sites.

The burial sites were just the tip of the iceberg!  In a clay pot, the team discovered the well-preserved remains of brain tissue making it one of, if not the oldest specimens of preserved brain tissue in the world. 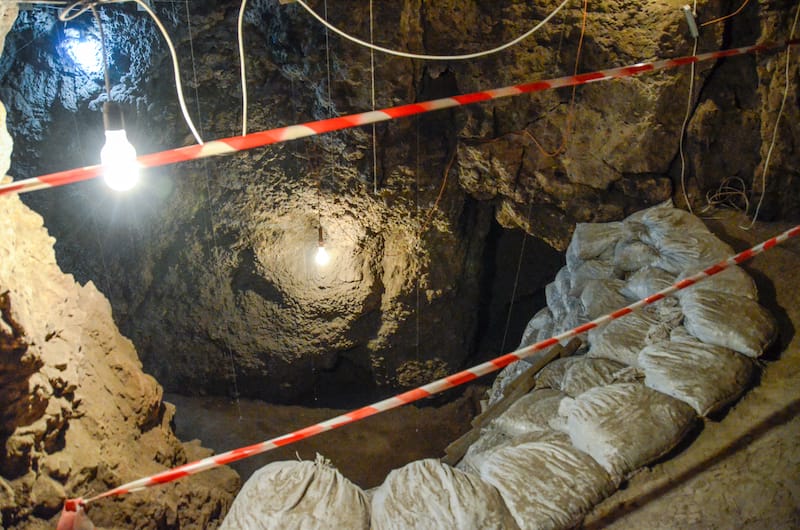 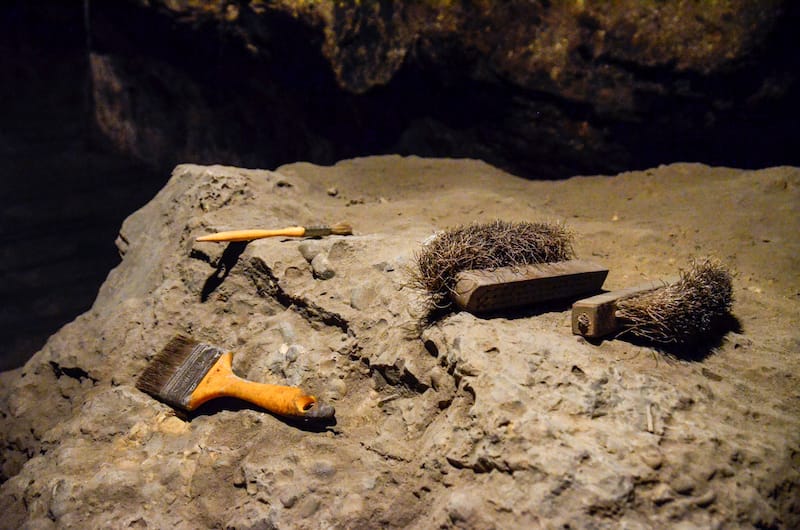 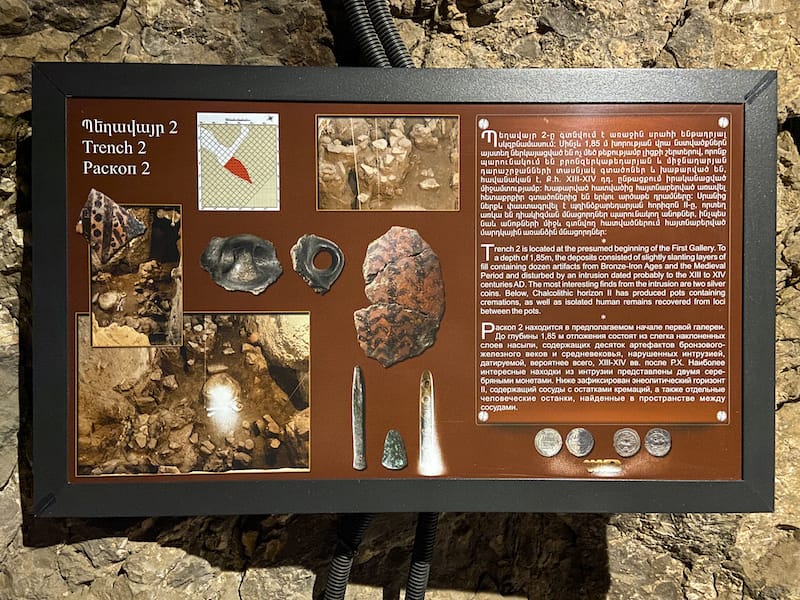 Excavations continued and in 2008 the next big discovery was made in the form of a leather shoe.  The shoe was dated back to 3500BCE which made it the oldest leather shoe in the world!

So how does a leather shoe survive intact for 5500 years?  Well, one of the major factors is that the conditions in the cave were consistently cool and dry.

Because of this climate, the archaeologists were also able to find remains of well-preserved barley, wheat, and even apricots.

Also, the shoe was found at the bottom of a small plastered pit that was insulated with sheep dung and covered with a ceramic bowl. 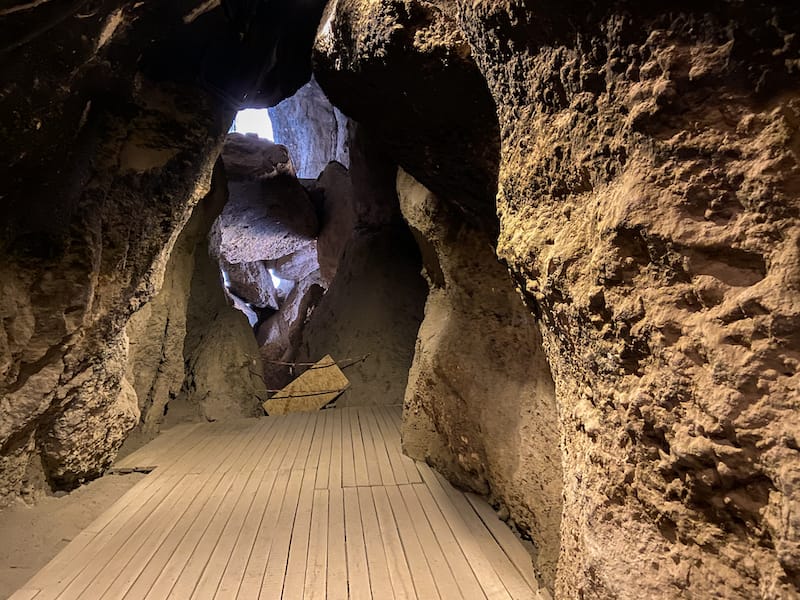 Found stuffed in the shoe was grass but archaeologists are unsure whether that was meant for insulation or to preserve the shape of the shoe.

The Areni-1 shoe is now on display at the History Museum of Armenia in Yerevan.

The Oldest Winery in the World

Around the same time as the shoe discovery, another major discovery was made- a winery!  The winery was dated back 6100 years making it the oldest known winery in the world. 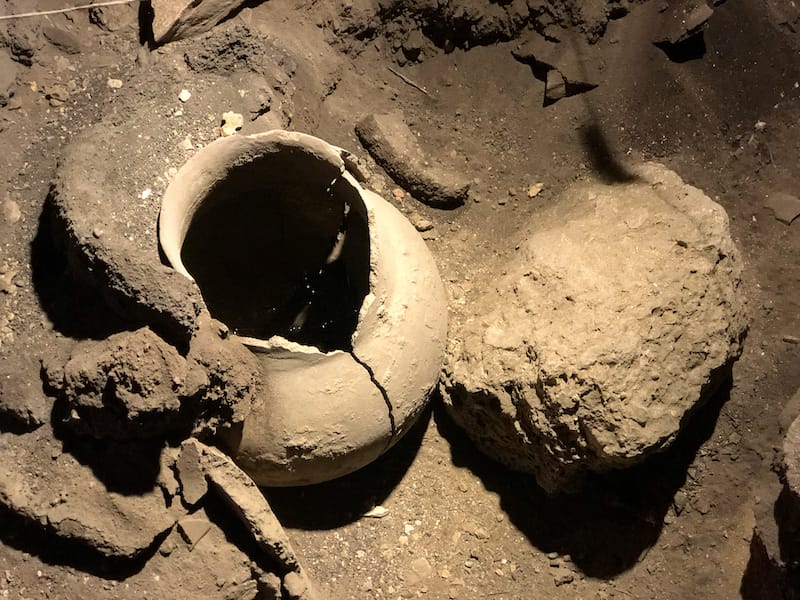 Previous to this discovery, the oldest known winery was located in the West Bank and was dated at least 1000 years more recent.  The archaeologists found wine-making equipment such as fermentation vats, a wine press, storage jars, and pottery sherds.

Inside the equipment were traces of the wine-making process such as remnants of grape seeds, pressed grapes, prunes, and walnuts.  These bits of biological material were important in dating the winery and confirming that it was indeed used for making wine and not something else. 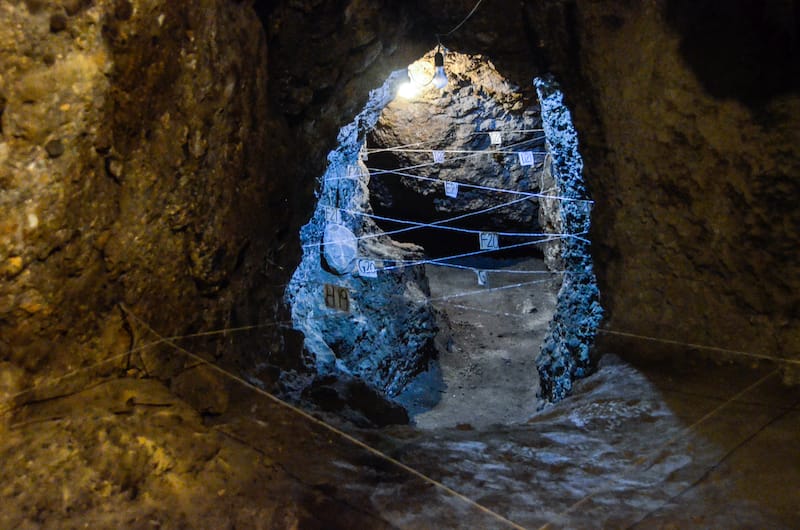 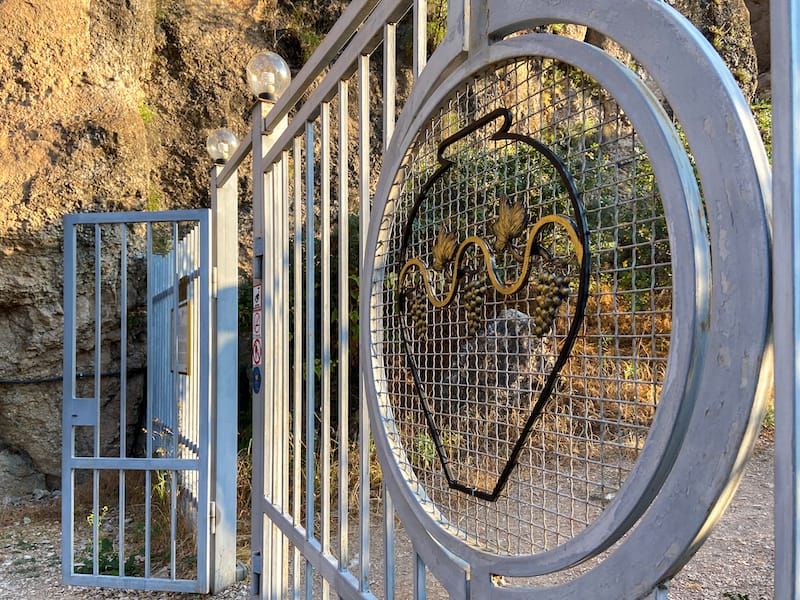 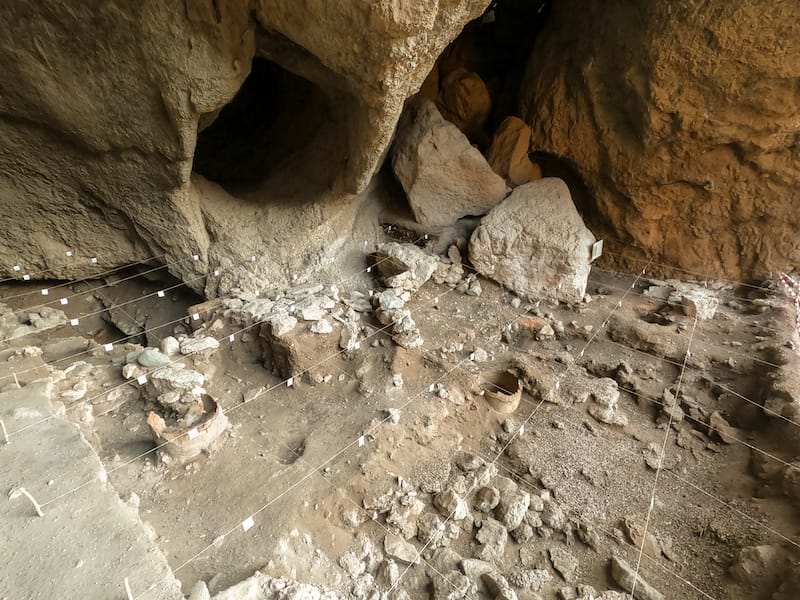 Chemical tests showed the remnants of malvidin which is a compound important in the pigment that gives red wine its color.

Several drinking cups were also found suggesting that since it was in the vicinity of the burial site, this could be an area where funeral or ritualistic ceremonies took place.

Information for Visiting the Areni Cave

When you visit the cave, I highly suggest you have a guide with you to explain each part of the cave.  Sometimes it is tough to understand what you are looking at! 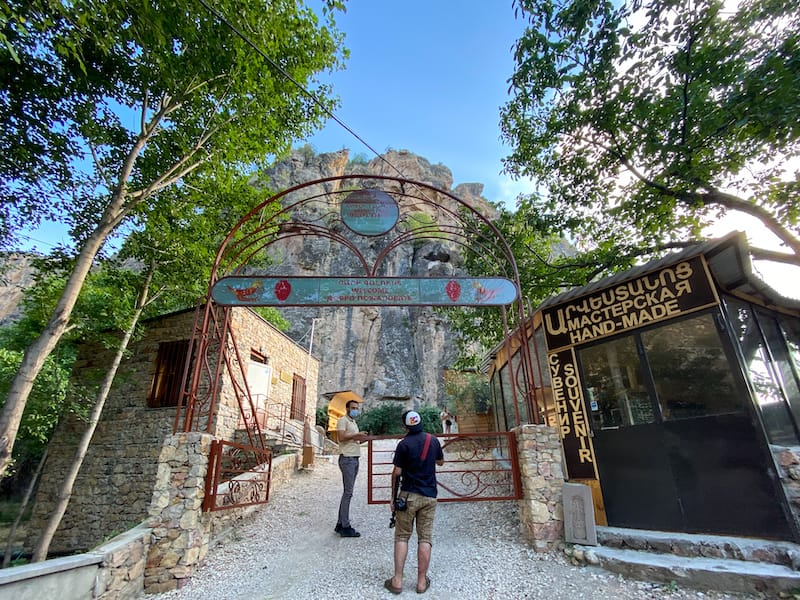 Also be prepared to get dusty, since the environment of the cave is dry.  The listed hours are 9am-7pm but it is probably next to call ahead just to be sure! 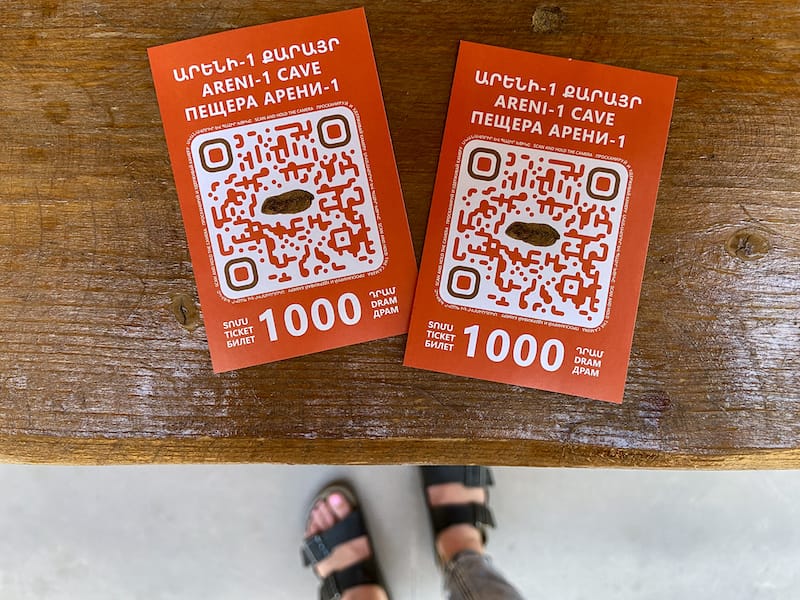 How to Get to Areni-1 Cave from Yerevan

You can visit Areni-1 Cave extremely easily with your own rental car or a tour. Click here to check the prices for renting a car in Armenia.

Another option (and our recommended one) for getting from Yerevan to Areni-1 Cave is via a tour.

The tours we suggest are ones that will take you to multiple locations and not just the cave (there is not too much to see in the cave although you can spend more time in Areni village which means you can stay overnight at Anapat Canyon)! 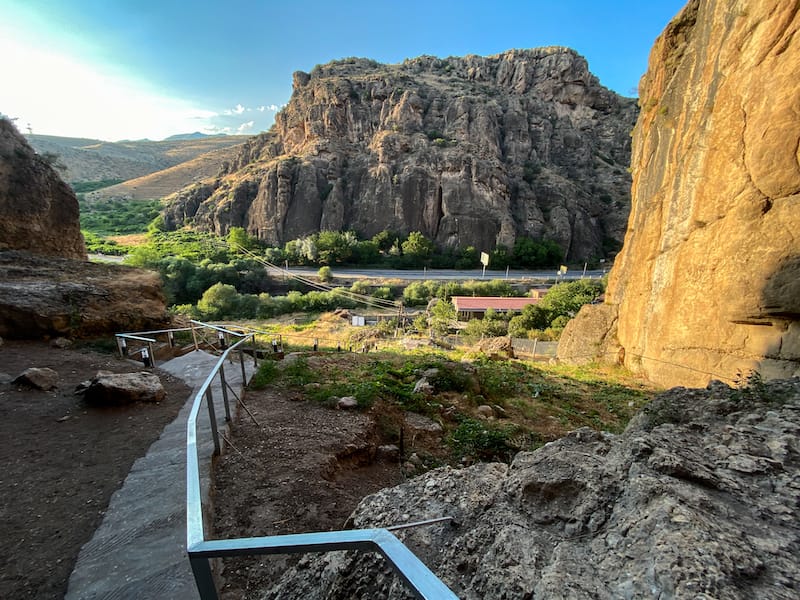 Here are our recommended tours that will take you to Areni-1 Cave on your trip:

To be honest, Areni sits right off of the main highway going south, so pretty much any marshrutka going to Syunik is going to pass it.

Just be sure to inform the driver where you would like to go and have it ready on a map (it helps to purchase a SIM card in Yerevan) for your own sake.

The Cave is literally right off of the main highway (you can even see it). 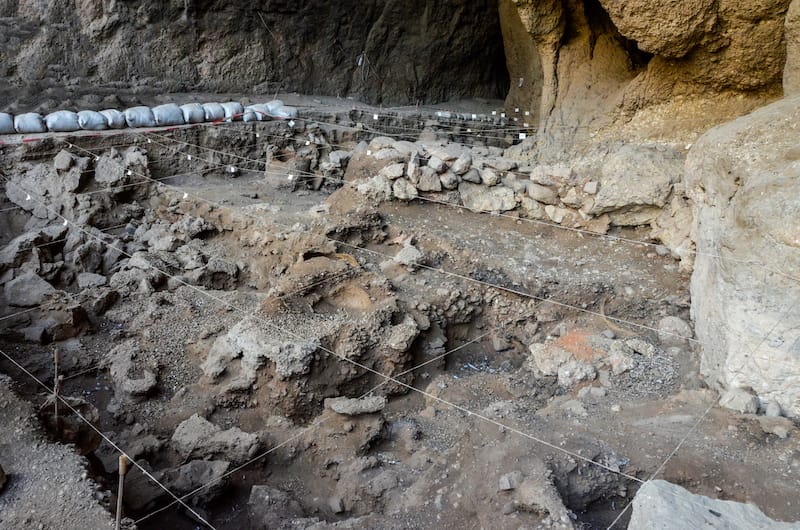 If you can’t make it down to Areni-1 Cave during your Armenia trip, you can find delicious Areni wine in Yerevan, actually.

Our top recommendation is to check out In Vino on Saryan Street – they are extremely knowledgeable and have wine from all over the country.

Do you have any tips for visiting Areni and the Areni-1 Cave? Leave us a comment below and let us know!