A gorgeous monastery in the Shirak marz that definitely doesn’t get the attention it deserves is Harichavank Monastery. This post will detail its history, my experience visiting Harichavank, and some tips about how to get there.

If you are a fan of this site, you should already know that the city of Gyumri is a must-see when visiting Armenia.  That being said, it is around a 2-hour drive from Yerevan which means there are plenty of opportunities to stop along the way and see some other less well-known sites!

The standard and slightly shorter route to Gyumri is the main highway to the west of Mount Aragats, but if you go around the eastern side of the mountain, which takes around 10 minutes longer, you will be able to stop at the beautiful monastery of Harichavank.

It is easily accessible by car, only 5 minutes from the main road!

About Harichavank Monastery (& My Experience)

When you first pull up to the site, you will just see outer buildings.  These were built around 1850 when the Katholikos of Echmiadzin made Harichavank his summer residence.

These outbuildings included offices, a refectory with a kitchen and a bakery, a school, a hostel for monks and disciples, an inn, stores, and cattle sheds.  I believe some of these buildings are still in use and when I visited they were not open to the public. 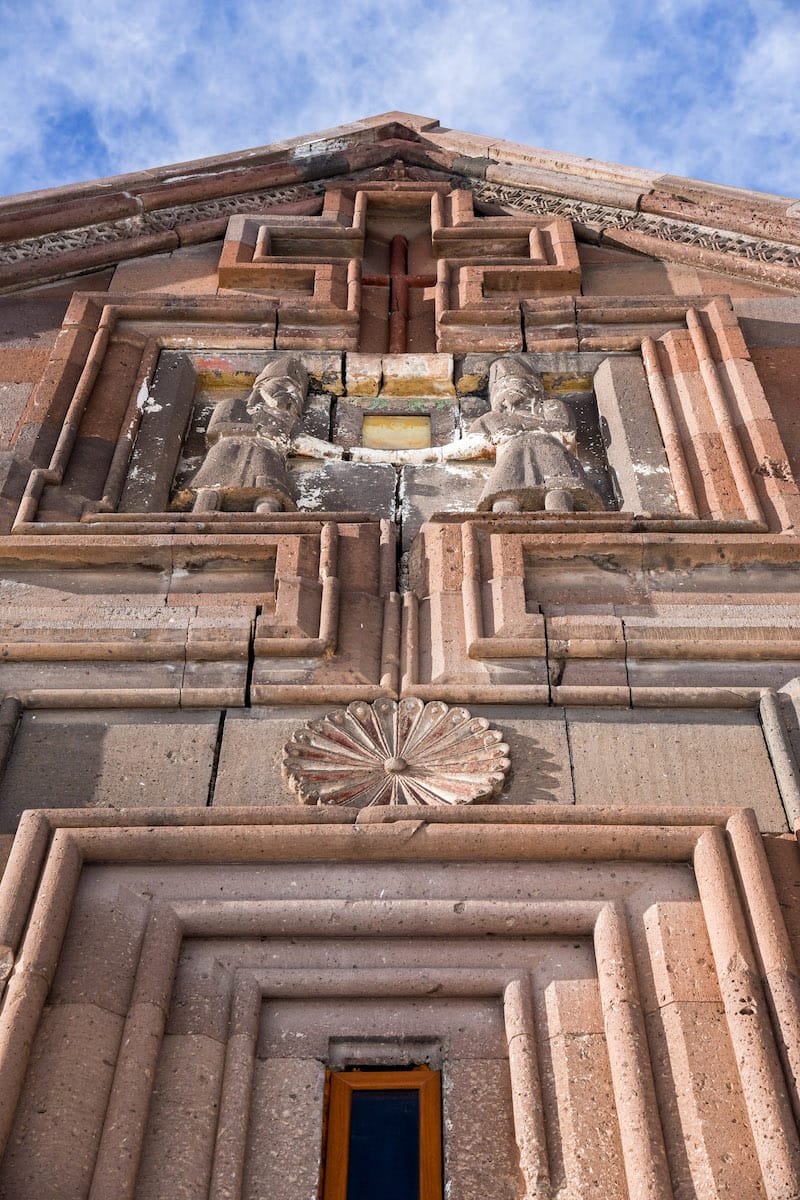 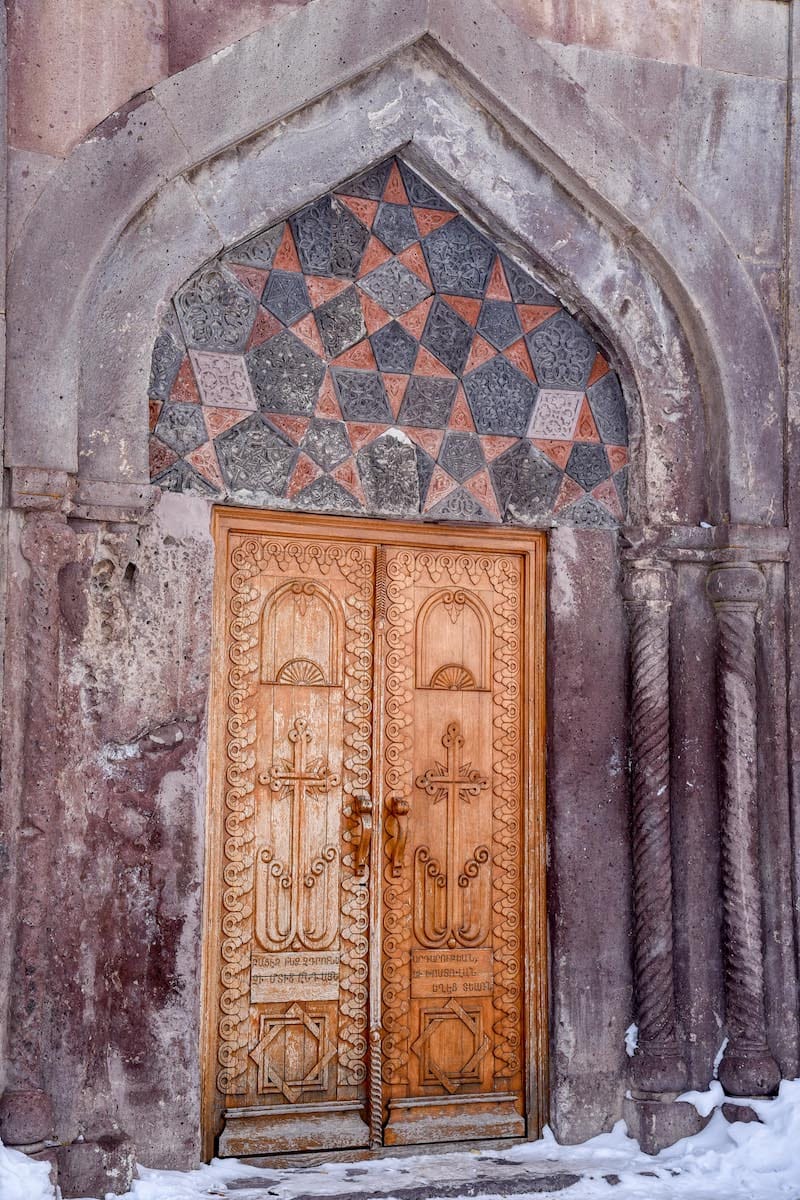 There is a passageway from the parking area into the inside of the complex and when you get inside you will be able to see the entire monastic complex.

I suggest walking around the entire exterior before venturing inside.  There are so many interesting things all around the area! 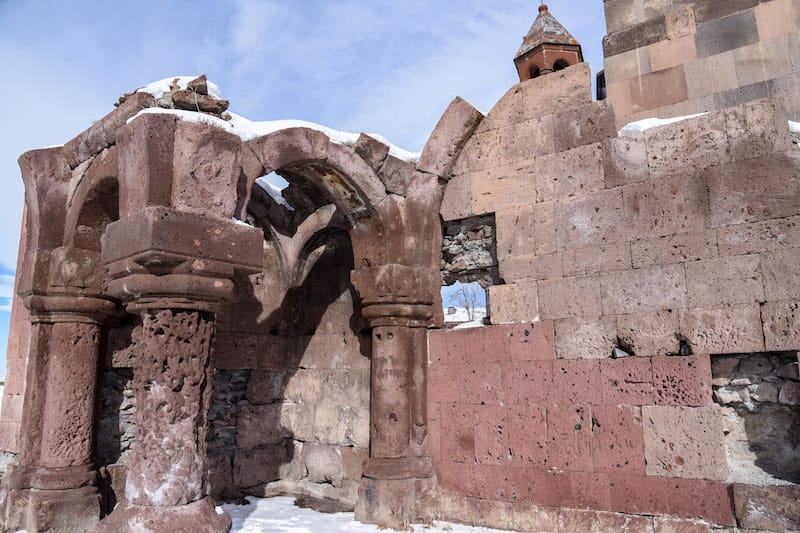 When you first walk in, you will notice 2 large domes and 2 cupolas, all with crosses on top.  The oldest church, on the right side (west) when you walk in, dedicated to St. Grigor Lusavorich (Gregory the Illuminator), was built around the 7th-century.

Although the exact date is unknown, an estimate has been made based on architectural features.  Throughout the centuries, structures have been added to this church, the latest being the 4 pillared bell tower at the entrance in the 19th century during the Katholikos’ expansion. 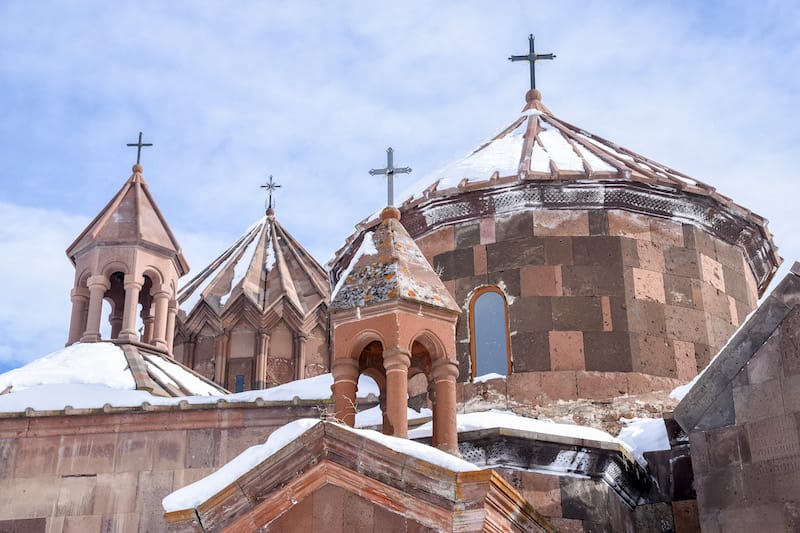 It is almost as if the rest of the monastery absorbed this original church.  Southwest of the church, you will find the ruins of a small gavit or vestry.

On the eastern side towards the rear is the largest church, the Cathedral of St. Astvatsatsin (Holy Mother of God), which was built in 1201 by Prince Zakare Zakarian.  This prince is also known to have built Akhtala Monastery in the northern Lori Province.

He started building the Cathedral after purchasing the site from a family of the Pahlavuni dynasty.  This cathedral is categorized as part of the “Gandzasar-style” of churches which have features including an umbrella-shaped dome, cruciform plan, and large cross bas-reliefs. 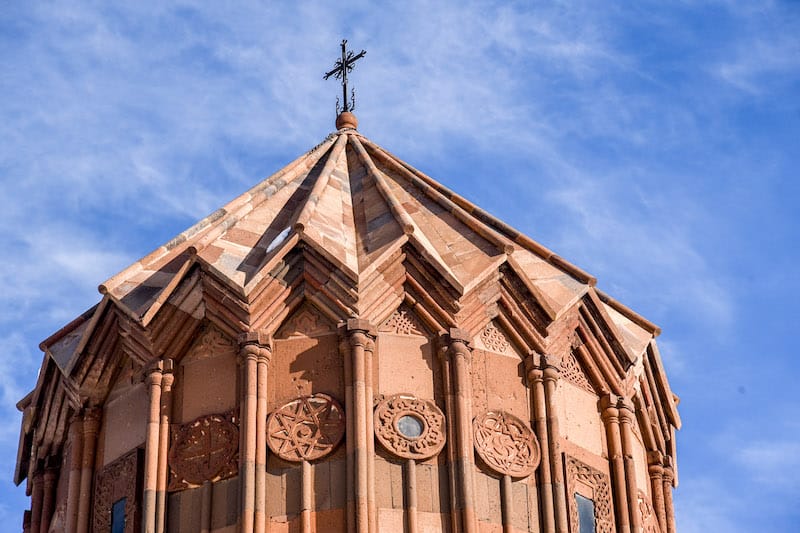 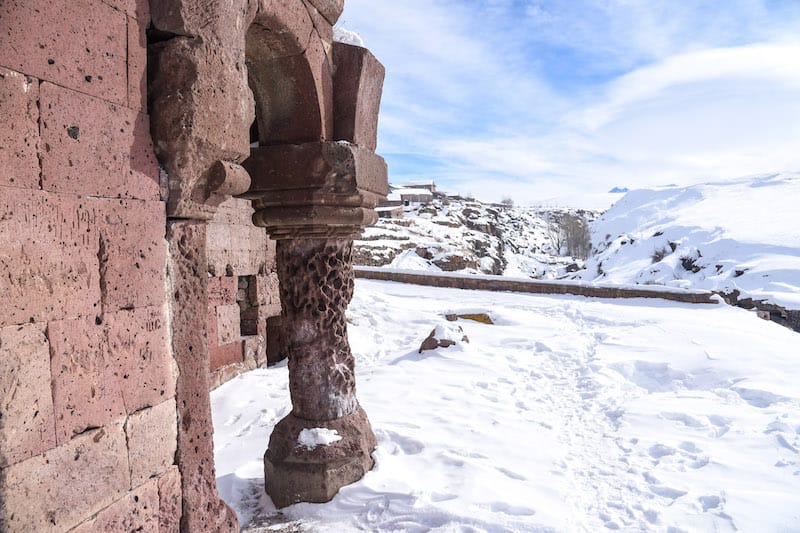 If you are going to spend any time really looking closely at the exterior, you should spend most of your time looking at this cathedral!  The dome has decorative triple columns all the way around and in between are large circular rosettes.

Each one is different! If you haven’t gotten the chance to visit Gandzasar Monastery in Artsakh, this is the next best thing. 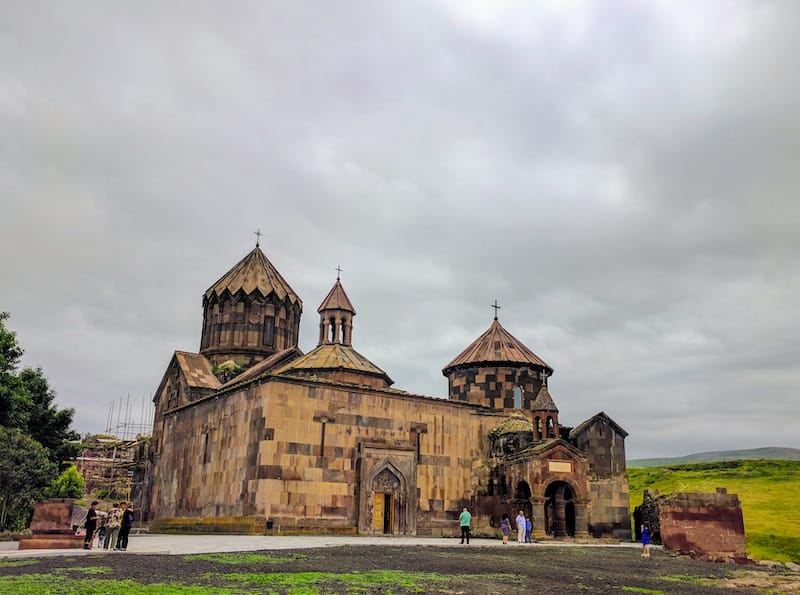 On the eastern wall of the cathedral, you will see the large cross bas-relief and in the middle a relief carving of the Zakarian brothers holding a model of the Cathedral.  It is often the case that the donors for the church are featured in a carving holding a model, although I am not sure if I have seen one so big and prominently featured!

Directly in the middle and connecting the two churches is the newest structure of the original complex, the gavit or entrance hall, which was built in 1224.  The most notable aspect is the beautiful entrance adorned with star-shaped decorative carvings. 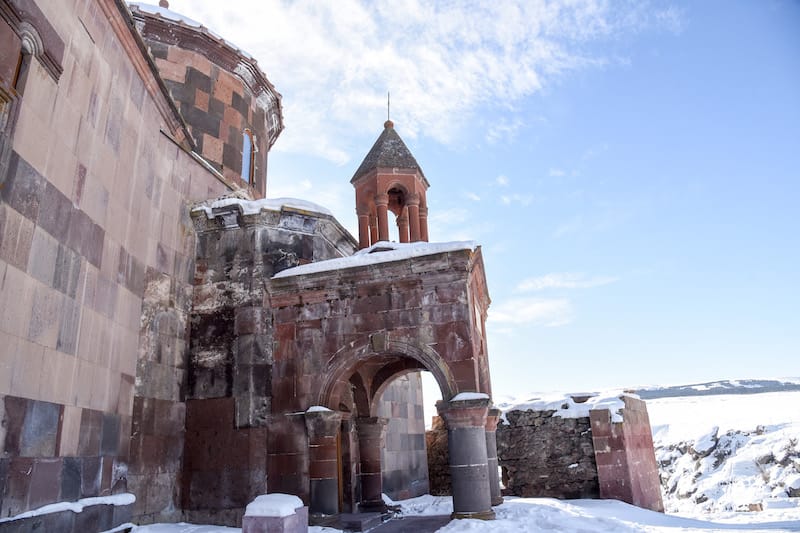 One last thing of note on the outside is a small 12th-century chapel that is perched on the top of a rock that has separated from the mainland. This is most likely due to an earthquake.  It is an interesting sight to be seen!

Moving to the inside of the monastery you will see many interesting and intricate carvings and decorations.  The gavit features a beautiful “stalactite-style” ceiling with many geometric shapes and patterns.

Besides that, the only other major decoration is on the front wall of the altar which is adorned with crisscrossing stalks and decorative leaves, a traditional early-13th century motif.  There are many little areas to explore inside, so try to stick your head everywhere! 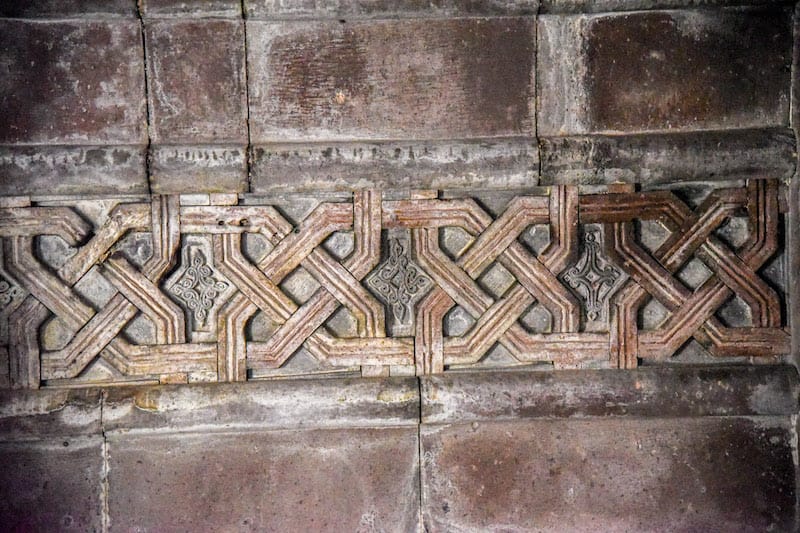 By the end of the 13th-century, the monastery had become an important center for the culture and religion of medieval Armenia.  Because of this distinction, over the centuries repairs and restorations were made and today we have a beautiful piece of history for us to enjoy!

If you would like to view an amazing 3D model of Harichavank courtesy of Renderforest and their 3Bee project, click here.

How to Get to Harichavank Monastery

As noted above, the easiest way to get to Harichavank Monastery is to rent a car in Yerevan or somewhere in Gyumri and drive there independently.

Alternatively, you can take a taxi to Harichavank Monastery from Gyumri, Yerevan, or Vanadzor. Below are the approximate one-way prices for a taxi there:

These prices are approximate and with GG Taxi, one of the best taxi and travel apps to download when in Armenia. 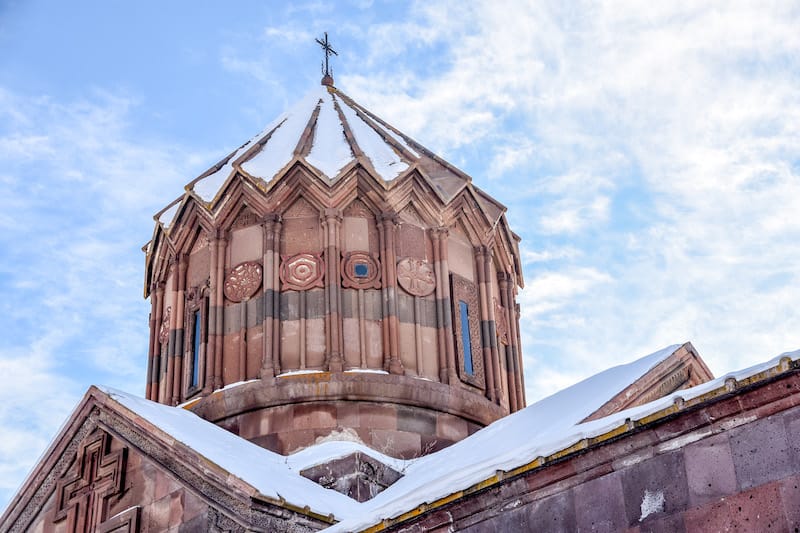 We hope that you found all the needed information to visit Harichavank Monastery (or to learn more about it)!

Please let us know your experience at Harichavank below and leave tips for future travelers interested in the Shirak monastery!

Pin this Guide to the Monastery of Harichavank