There is definitely something spectacular about Shirak province. It is cold, the landscapes look neverending, and there is no shortage of amazing places to visit in Shirak.

This guide details some of the coolest places in Shirak – from big cities (well, big city), to villages, to historic monasteries and sights.

We love how clean Shirak is and how accessible most of the landmarks and attractions are compared to many other places around Armenia.

Did we miss any amazing destinations in Shirak? Let us know your top picks in the comments! Thanks!

Another must-visit site is Sev Berd, a perfectly circular black fortress. Stroll along Jivani street to witness the consequences of the devastating Spitak earthquake of 1988 on the city’s old hospital ruins.

For a great dose of Shirak inspiration, visit the Gyumri House Museum to admire the stunning works of the Aslamazyan Sisters and the memorabilia of the famous Mher Mkrtchyan.

Gyumri is also packed with plenty of Soviet Monuments, such as Mother Armenia, the Monument to the Great Patriotic War, the Gyumri Iron Fountain, etc.

I also had an amazing tour with Ashot Mirzoyan, a local architect and founder of the City Research Center in Gyumri where I got to learn more about the Kumayri district’s historic architecture and structures!

As one of Armenia’s four protected national parks, Lake Arpi National Park is where you can witness an unspoiled corner of Armenia’s stunning nature.

It was established with the main goal of protecting the region’s rich flora and fauna. Spanning over 21,179 hectares of land, the park is home to Lake Arpi, small lakes, wetlands, around 670 species of diverse plants, 255 species of animals (including the Darevsky Viper and Dalmatian pelican), and more.

For one-of-a-kind, cross-border ecotourism adventures, you can also combine your trip by visiting Javakheti Protected Areas in Georgia.

Named after Hayk Nahapet’s grandson, Amasia is a small village nestled on the Akhuryan River’s right bank. Visit the newly opened Amasia Wool Factory to witness and feel the real high-quality Armenian wool produced both for domestic and international use. 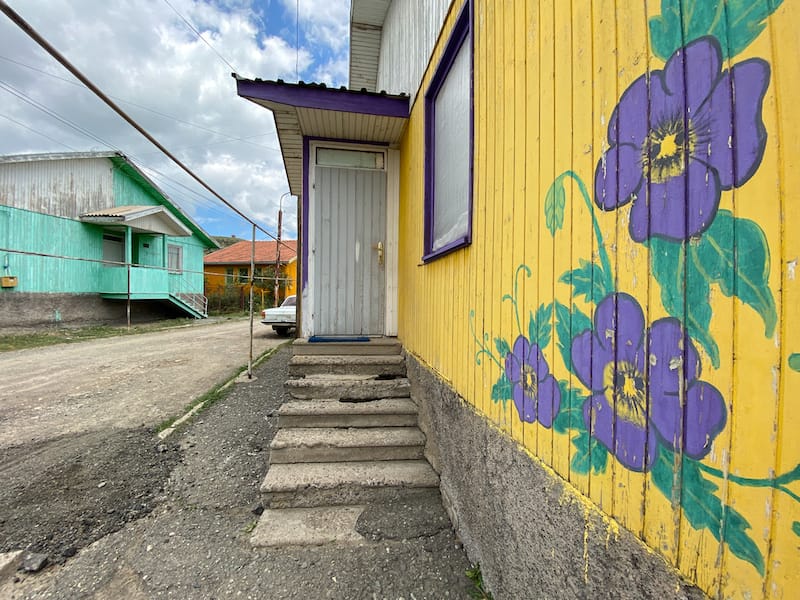 Get ready to marvel at a colorful array of homes which certainly give a unique touch to surrounding traditional pink and black tuff buildings.

History buffs will love visiting nearby Chatin Dara Fortress to see the ruins of Cyclopean-style fortress dating back to 3-2 millennia BCE, a WWII memorial built in 1967, and the still-standing massive statue of Lenin, which was built in late 1985.

Known as “Armenian Siberia”, Ashotsk village is renowned for being the coldest place in Armenia. It was established in the first half of the 19th century by people migrating from Western Armenia.

The village is the perfect place for winter enthusiasts to try cross-country skiing and other winter sports. Plan your visit to Ashotsk village during the winter season to visit the Ashotsk Ski Center and enjoy the full splendor of Ashotsk’s stunning nature.

The ski center belongs to the Miqayelyan family, whose members are all athletes and professional skiers. Don’t expect to see a commercialized ski hub and resort area in the future, as the family wants to keep the uniqueness of the surrounding nature unspoiled.

Known as the second major monastic complex in the Shirak region, Marmashen Monastery is located 2 km away from Marmashen village.

This 10th-century monastic complex comprising of 5 churches is considered to be one of the finest architectural marvels of the Bagratuni dynasty’s era.

The inscriptions left on the wall state that the Monastery was built by Prince Vahram Pahlavuni in 988 and lasted until 1029. The complex has a remarkable architectural value and was one of the most prominent spiritual centers in medieval Armenia.

The monastery complex was destroyed by Seljuks in the XI century and then by Tatar-Mongols in XIII century, during which the main church was transformed into a fortress and in 1255 was finally reconstructed.

You can easily take a day trip to Marmashen Monastery from Gyumri by taxi or by car, but to be honest, there is no better way to see this ancient monastery than by biking there!

Hiking and biking with Mamikon is an adventure where you get to venture out to Marmashen from Gyumri city center and pass through so many other cool sights along the way!

Nestled on the border of Shirak and Lori regions, Trchkan Waterfall is often referred to as the Armenian Niagara due to its status as Armenia’s tallest waterfall.

This 75 feet gorgeous waterfall pours into the Chichkhan River that in turn, streams from the slopes of the Shirak Mountains.

The name of this waterfall has a story behind it, which is related to the fact that the Chichkhan River is abundant with trout that swim upstream during their mating season.

Those trout jump over the waterfall and the natural landmark was named for that because Trchkan means ‘jumping’ in Armenian. Since 2008, Trchkan Waterfall has held a spot on Armenia’s list of natural monuments.

Harichavank Monastery Complex is one of the unique gems of Armenian medieval architecture. The Monastery is located in the village Harich and dates back to as early as the 7th-century.

During a number of excavations, various working tools, tombs, the remains of the 3-5th century medieval castle, and luxury items were found nearby. Historical sources claim that Harichavank was destroyed in the 11th century by Seljuk invasions and restored later in the 12th century.

Lmbatavank is another architectural masterpiece on this list showcasing the rich heritage of Armenia. The Monastery is located southwest from Artik city and is considered to be the oldest well-preserved building constructed with Artik tufa stone.

Lmbatavank’s St. Stephen Church is a cross-shaped building constructed in the 7th-century that has an octahedral drum topped by a dome and catches an eye with its vaulted roofs and wall paintings.

Get ready to be shocked by the early medieval fresco remains carved on the walls, which are considered to be rare treasures nowadays. Nearby, you can find many khachkars (cross-stones) and XI-X century graves.

Situated on the western slope of Aragats Mountain, Maralik is a small town rich in archaeological history and noteworthy sites. Translating as “little deer” in Armenian, Maralik was named in memory of the animal.

The legend states that every year a deer approaching the Monastery was sacrificed, and one day, a hunter killed the deer, which made it disappear from the area.

Historically the town was part of Ayrarat Province of Great Armenia, which was ruled by the Kamsarakan family. The city is home to the Holy Mother of the God, Poghos-Petros and St. Stephan Churches, the medieval chapel of Ghushi, the cyclopean fortress, numerous khachkars, etc.

The church was built in the 5th century and reconstructed in the 7th century by priest Grigor under Bishop Teodoros Gnuni according to the inscriptions on southern and eastern walls.

The Church has a complex design and features a cruciform plan, four projecting apses, and an inward-facing circular and outward-facing polygonal structure to hold up the stunning 11.2-meter diameter cupola.

In the 18th century, a wall was constructed around the church so that it could serve as a fortress. The local priest demolished the wall in 1889 with the main purpose of starting the reconstruction works inside the church.

Anipemza village is nestled close to the Turkish-Armenian border, on the right bank of the Akhurian River.

It catches the eye with its classic European style two-story parallel buildings, which highlight the details inherited from the Italian-French Renaissance.

Anipemza is the ancient Armenian capital of Ani which was founded in the IV century by Kamsarakan princes. History lovers can explore the ruins of Yereruyk Basilica, which dates back to the IV-V century and is made of red tufa stone.

Considered to be the biggest church in Medieval Armenia, Yereruyk Basilica is one of the gems of Armenian architecture and it is made of light orange tufa stone, which you can still witness in its half-ruined states.

Nestled on the left bank of the Akhuryan River, this early Christian temple was built in the 5th century and includes displays of antique architecture.

The temple was built on 6 pillars and was thought to be quivering from a distance, from which it got its name (meaning “yereral” in Armenian).

The surprising thing about this temple is that it had never been mentioned in the records, but you can still see a few inscriptions on the southern wall.

Located on a small hill between Zorakert and Lake Arpi is an old Muslim cemetery. Even though it is quite uncommon to find signs of Islamic influence in Armenia today, you can still see some symbols of Islamic importance in this cemetery.

There are over 100 painted and hand-carved headstones, few of which appear just to have been painted but are, in fact, many decades old.

You will find many vibrant symbols of Islamic religion carved on both fallen and still standing headstones.

Ever wished you could go back in time? If so, then visiting Horom Citadel should be on your Armenia bucket list. Once a marvelous fortified city, now all you can witness is a collection of stone walls and structural outlines.

Horom Citadel was considered one of medieval Armenia’s architectural wonders, which dates back from the early Bronze age through Medieval times (9 century B.C.) and has an occupation span of approximately 5000 years.

If you have a vivid imagination, be sure that you can still see the ancient city!  Many remains dating back to 3-1 millennium B.C. were unearthed during excavations, including pottery, working tools made of basalt, tuff, obsidian, and so on.

Gusanagyugh Fortress is located in Gusanagyugh village, 15 km northwest of Maralik. This medieval fortress dates back to the X-XII century and was built by the area’s sovereign family.

Now only two 20 feet of walls and two circular areas are left from the fortress. Many historical sources confirm that there used to be a small village there, and the preserved mortarless cyclopean stonework on the Shah Tapa hill is its main proof.

You will only need 10 minutes to check out the remains and the area surrounding them and it is one of the most interesting places to visit in Shirak.

Artik village, located on the northwest slope of Aragats Mountain, is considered to be one of Armenia’s oldest settlements. Known for being the main center of Armenia’s tufa production, the village catches an eye with its similar-looking buildings made of rose-colored tufa stone.

Artik is also home to some of the Medieval Armenian architectural masterpieces that prove Artik to be Armenia’s most ancient settlement- Surb Gevorg of Artik dating back to the 7th century and St. Marine or Surb Astvatsatsin Church built in the 5th century.

Both are half-ruined, yet even the ruins allow visitors to appreciate the real beauty and majesty of these architectural marvels.

Zorakert Mosque is nestled on the northeast section of Lake Arpi in the small village Zorakert.

It was built in the 19th-20th century and was operating until the beginning of the Soviet era, during which it was closed and turned into a warehouse.

Now all you can see are the abandoned ruins of the Mosque, which include 4 outer walls with arched windows. One of the walls still has the remains of the shrine, which in turn has Arabic inscriptions written over it.

Did we miss any of your favorite places in Shirak?

Let us know the best places to visit in Shirak in the comments. Thanks!