If you are looking for a little off-road adventure (actually it’s a rough dirt road) with beautiful panoramic views and interesting medieval and modern history, look no further than Spitakavor Monastery!

Located in the Vayots Dzor Province, it is a manageable drive from Yeghegnadzor, the provincial capital of Vayots Dzor.  I stayed at the scenic Old Bridge B&B and enjoyed the amazing fresh food and wine from their winery! 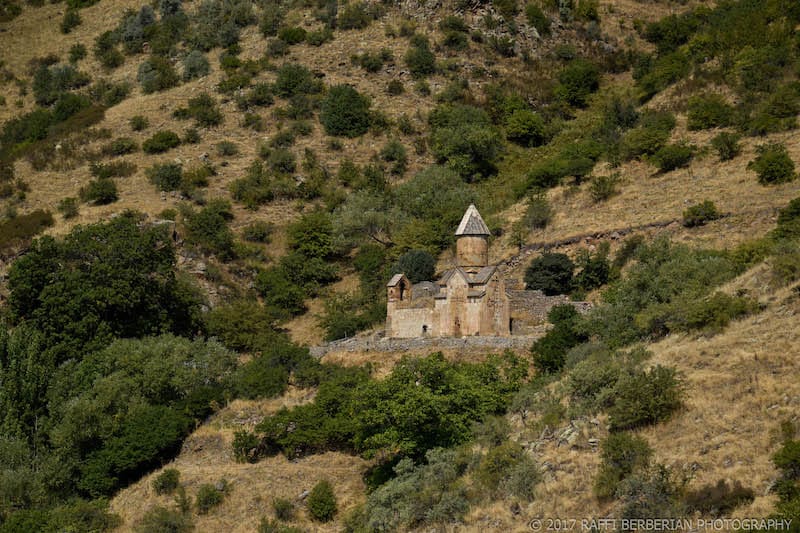 The road up the mountain to Spitakavor is winding with beautiful views and be sure to have a 4×4 vehicle.  I am not sure if a regular taxi service will take you, but I am sure you can find a tour company that would be willing.

As with all of my trips, we had rented a 4×4 ourselves to drive wherever we could.  Luckily with Spitakavor, Google Maps will take you!

As you near the monastery, you will see it in the distance sticking out of the steep mountainside.  One reason it sticks out is that it is constructed of polished felsite stone which gives it a white color and its name Spitakavor. “Spitak” means white in Armenian. 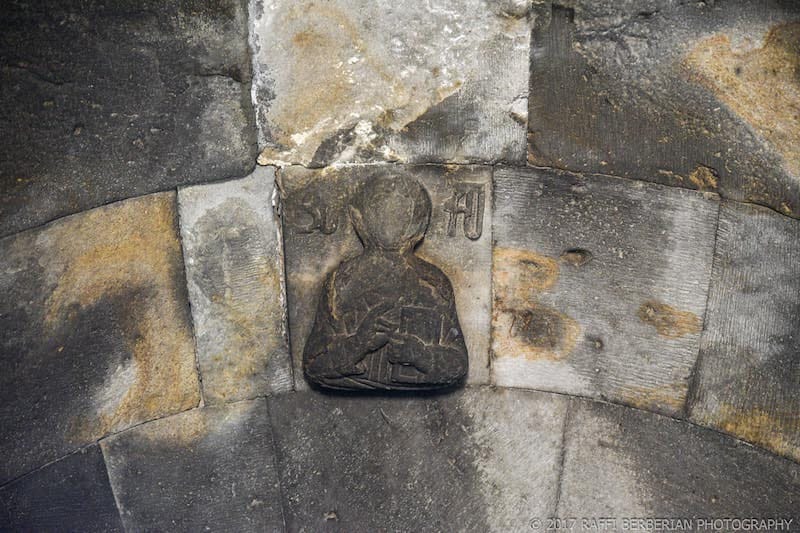 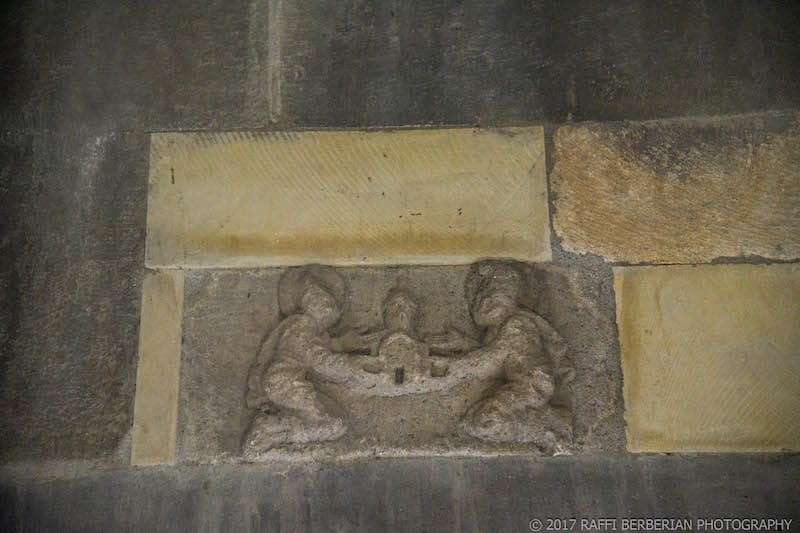 It is a wonder how it was built in such a seemingly inhospitable place for a building.  Once you arrive, you will notice that the sight is not a large area and is perfectly nestled on a ledge of the mountain.

About Spitakavor Monastery in Vayots Dzor

The Monastery was built in the 14th-century on the site of a 5th-century basilica by two princes from the Proshian dynasty.  Prince Eachi initiated the construction but died in 1318.  It was completed 3 years later in 1321 by his son Prince Amir Hasan II.

From the parking area behind the monastery, there are a few steps that take you to the entrance of the monastery.  The first thing you will notice is the three-story bell tower.

This is actually the last addition to the monastery.  It was added to the western wall of the now roofless gavit by Hovhannes Proshian and his wife, Tadzna in 1330.

The gavit was built directly prior to the bell tower between 1321-1330. Not to be missed inside the gavit is the beautiful tympanum over the entrance to the church. 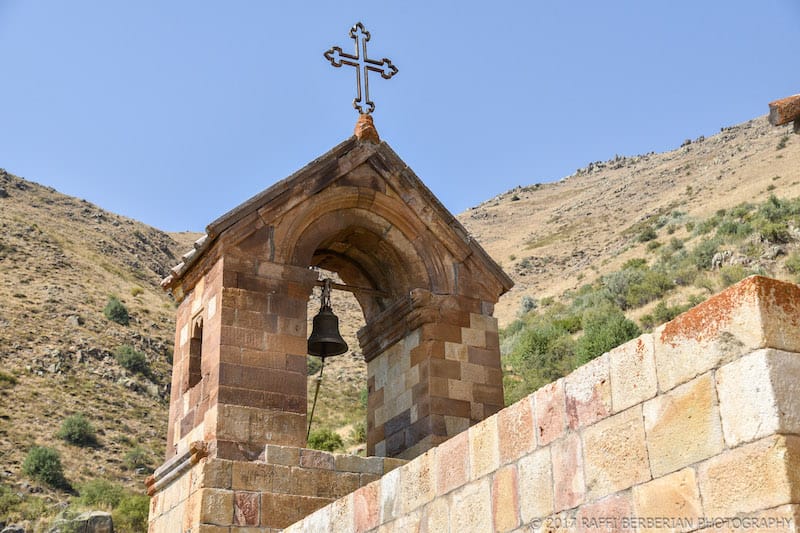 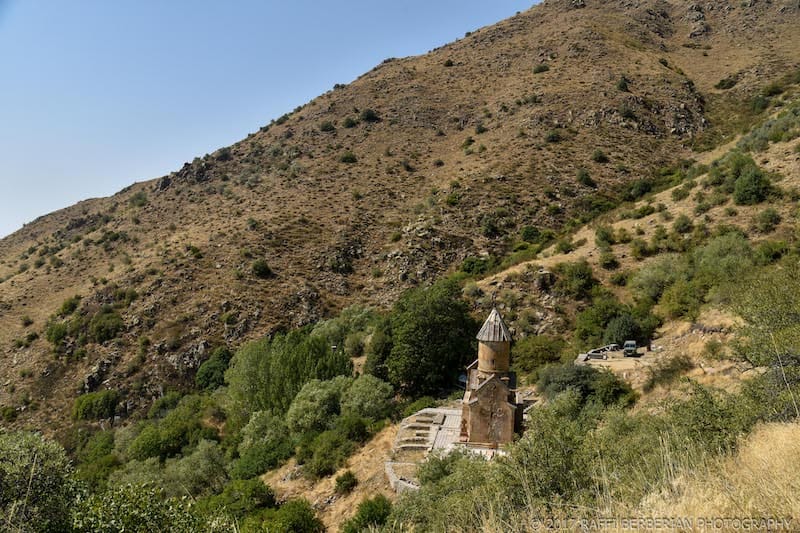 It features a beautiful decorative arch and a bas-relief of the Virgin Mary and Baby Jesus.  It is truly the jewel of this monastery!

Entering the church you will find a large cavernous space, even though from the outside the church doesn’t seem so big.  There aren’t many decorations in the church, but the few that are present accentuate the architecture of the church marvelously!

Among the decorations, you will find carved inscriptions on the walls, a carved portrait of Jesus, and even a small carving of the two princes holding up a model of the church. 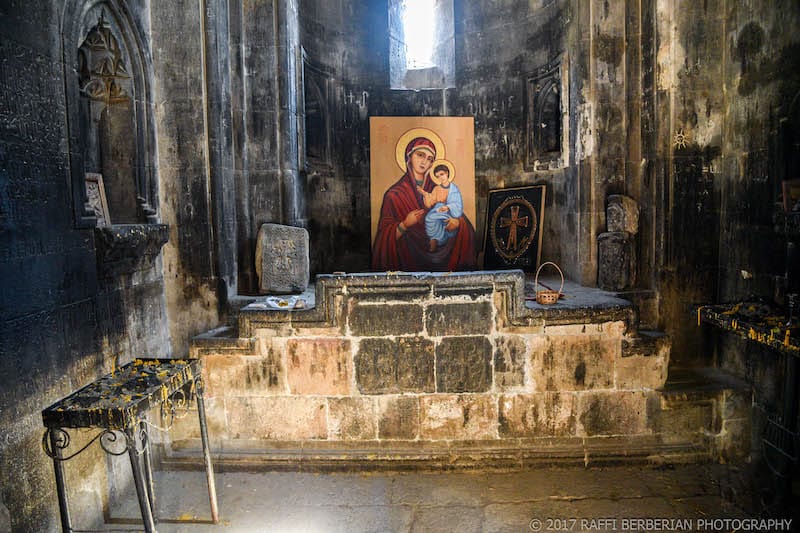 On the exterior walls of the church, you will also find several decorative bas-reliefs.  The decorations are very similar to the ones at Noravank so it is believed to have been completed by the same master.  Take a moment to view the southern wall which has a unique large cross with arms that end with pentagonal stars.

In relatively modern history, directly under that unique cross, you will find the grave of the great Armenian General Garegin Nzhdeh.  In 1955 he died in a Soviet prison and his remains were secretly buried here in the mid-80s. The actual gravestone and marker were placed in 1989. 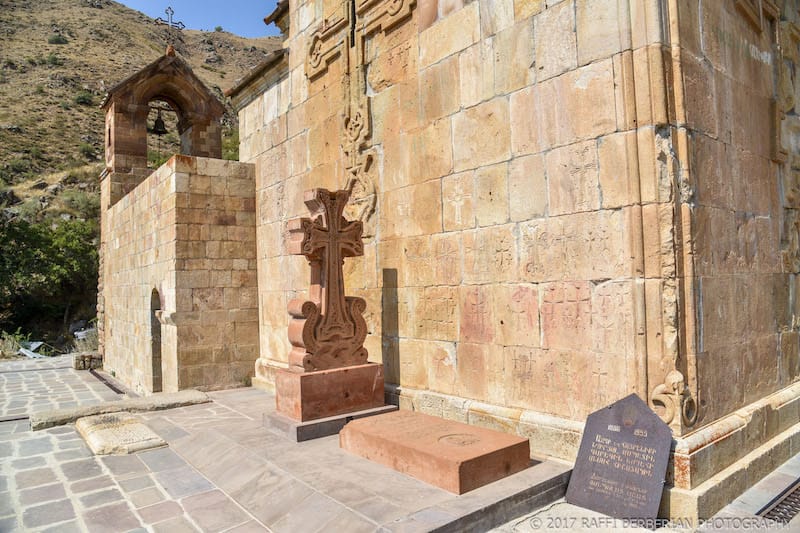 His final move was on 26 April 2005.  During the celebration of the 84th anniversary of the Republic of Mountainous Armenia, parts of Nzhdeh’s body were taken from the Spitakavor Monastery to the slopes of Mount Khustup near Nzhdeh’s memorial in Kapan.  Every year on June 17th, Armenians make a pilgrimage to visit his grave.

The monastic complex was restored in the 60s and 70s and finally in 2006.  You can see how it looked before the restoration from this beautiful watercolor painting by Vahe Ashodian based on a photo from 1968.

Before heading back down the mountain, be sure not to miss the ruins of the fortress of Boloraberd which is only a 5-minute drive and a short hike away! 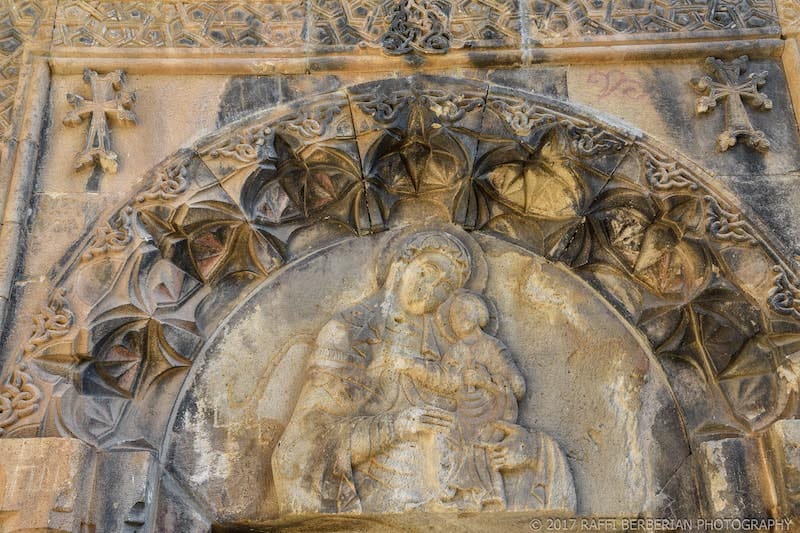 How to Get to Yeghegnadzor from Yerevan

In order to get out to Spitakavor Monastery, you first need to get from Yerevan to Yeghegnadzor, one of the main cities in this part of Armenia.

There are two options to do so from Yerevan, aside from renting your own car (which is easiest as you can make it to the monastery directly with the right type of car).

The cost of a minibus from Yerevan to Yeghegnadzor (Եղեգնաձոր) is about 1500 AMD. It leaves from behind the main Yerevan Railway Station. There are some infrequent minibuses going but we have personally taken the one that leaves there at 0730. 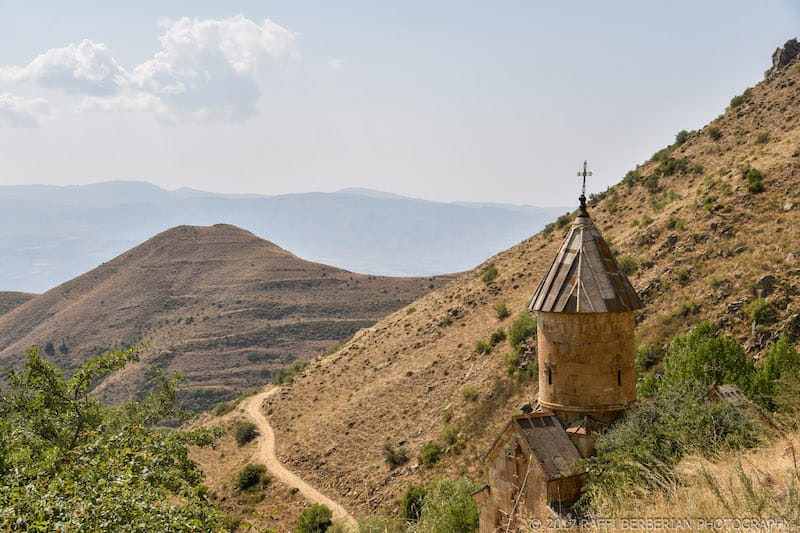 This bus is a bit older but gets the job done. It is best to reserve a seat beforehand in order to ensure you have a place. To do so, call +374 94111589. If you don’t speak Armenian, please have your hotel in Yerevan call for you!

The ride is about 2.5 hours maximum. 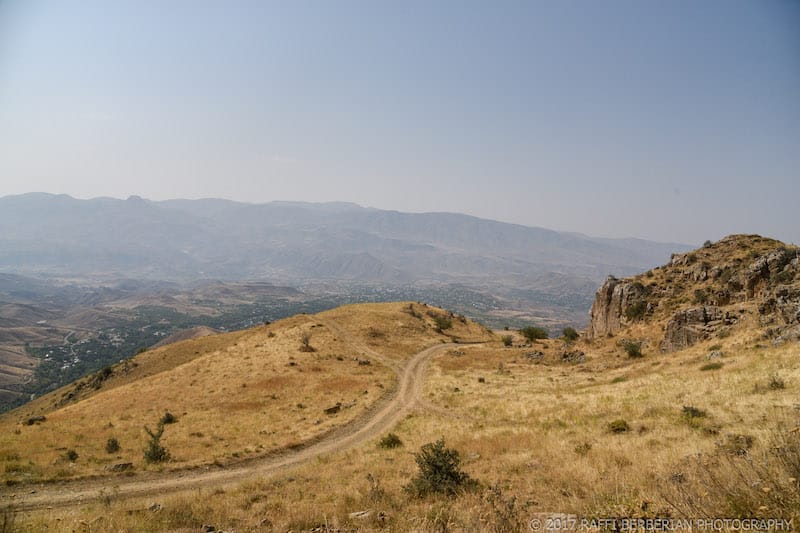 Another option for getting to Yeghegnadzor is to take a taxi there from Yerevan. The approximate one-way price is 13000 AMD. Just note that this does not take you to the monastery but only to Yeghegnadzor.

We hope that you found this guide helpful for learning more about Spitakavor Monastery! Let us know if you have any questions in the comments. Thanks!